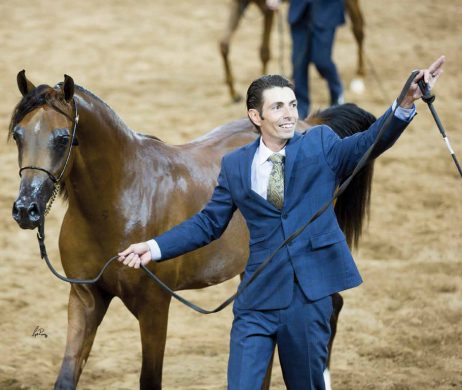 In his famed novel “The Alchemist,” Brazilian author Paulo Coelho describes the story of a young man, a shepherd, who travels far and wide to pursue his “personal legend,” his destiny. The young man is told by a mysterious king that the universe wishes for each person to accomplish his or her personal legend, and as he makes the journey, he encounters many other characters who help him meet his destiny in ways he never expected.

Throughout, he seems to be in just the right circumstance to meet just the right person at just the right time. It’s a beautiful story about how people are interconnected, about listening to one’s inner self for direction, and ultimately following the path that has been laid out for you from the beginning. Like the young man in the story, Lucho Guimarães has sought his personal legend, traveling the world in a quest that has led him from one opportunity to the next. And all paths lead to the same thing: the Arabian horse. In the little over six months it has been in business, Lucho Guimarães Arabians has experienced the profound success that only happens when one is following the journey that has been meant for them all along.

IN THE BEGINNING
Lucho was born in São Paulo, Brazil, and raised in the south of Brazil with his two brothers. They were not a horse family in the beginning, but one of Lucho’s brothers was incredibly shy. They took him to doctors and experts, who suggested that horses may bring the young boy out of his shell. The family often went for weekend drives in the countryside, and one day, they came across a horse boarding facility. They walked onto the property and made friends with the owner, who agreed to help them find a horse. He took them to a farm that had Criollo, a native breed of horse known for their endurance. There, Lucho and his brothers spotted a mare and foal in the pasture, dying. “The mare was actually laying down, skin and bones, and couldn’t get up,” recalls Lucho. “She already had a bunch of sores on one of her sides from laying down and trying to get up. The baby was around her, probably a week old and about to die too, probably hadn’t been nursing for days. Me and my brothers started crying and said, ‘That is what I want.’ My dad said ‘Well you can’t ride that. We want a horse for you guys to ride.’” [read full article]